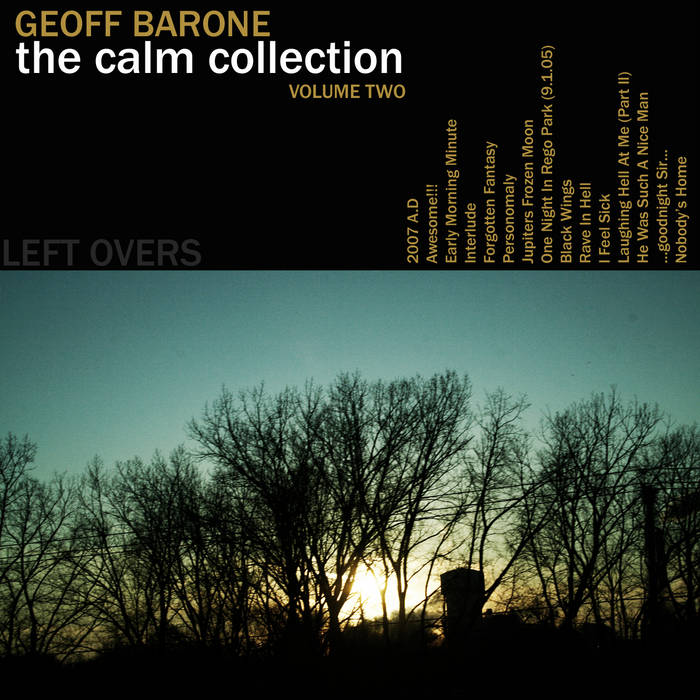 The Calm Collection II: is a collection of self-produced short instrumentals, shred-guitar driven rockers & film-scores . Fans of Frank Zappa, Mr Bungle, Mike Patton and Danny Elfman will approve. This volume is more theme and orchestral driven showcasing Geoff's talent for scoring for Film and Television. This album also includes songs that were written for "Conversation Pieces" but didnt make the final cut as well as some b-sides from Volume I: The Moments in Question.

The Calm Collections abundantly features what Geoff likes to refer to as "recorded situations", which are snippets of audio that he had recorded onto Micro-Casette. He has used these little nuggets, in such a way, that makes each song, almost sound like something out of a movie or film. The album has a wide array of musical styles and moods, One minute you will be hearing Avant-Garde noise and vocal explorative soundscapes and the next minute funky finger-snappin' jazz and solo guitar driven shred. Recorded between the fall of 2006 into the spring 2007 in Geoff's N.Y.C home studio.

Credits:
Recorded and Mixed by Geoff Barone at E.23rd Street Studios (New York,NY) in the of Autumn 2006 to Spring 2007 except
"Nobody's Home" recorded at 603 Studios (Niagara Falls, NY) in the Autumn of 2005 by Geoff Barone and mixed at Tough Guy Studios by Ryan Gaines & GB.

Additional samples, recording and production done at Tough Guy Studios (Lewiston,NY) in the Spring of 2004 by GB and Ryan Gaines.

Mastered by Michael Zucker at Differential Studios (New York,NY) in the summer of 2009


***It is recommended to listen to this album with headphones***